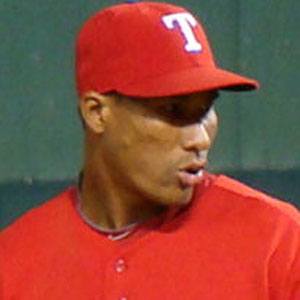 Dominican pitcher who broke into the MLB with the Texas Rangers in 2010 and was selected to the 2011 American League All-Star team.

He joined the Oakland Athletics organization in 2002 as an outfielder and hit .342 for the AZL Athletics in 2003.

He pitched in six of the seven games of the 2011 World Series for the Rangers.

In August 2011, he went on paternity leave to fly to the Dominican Republic to be there for the birth of his child.

As a rookie in 2010, he played alongside teammate Josh Hamilton, who was named the 2010 AL MVP.

Alexi Ogando Is A Member Of