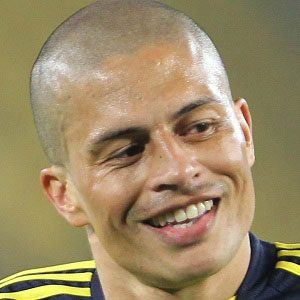 Brazilian former soccer star who captained the Brazilian national team and led them to the Copa America title in 1999 and 2004. He also had great success at clubs like Cruzeiro, where he won the so-called Brazilian Triple Crown by winning the State Championship, the Brasileirao and the Brazilian Cup in 2003.

He was born in Curitiba, the capital city of the Brazilian state of Parana, and made his professional soccer debut with Coritiba in 1995.

He broke the Brasileirao record by scoring more than 100 goals in 46 games.

He has children named Maria, Antonia and Felipe with a woman named Daianne, whom he married in 2000.

He played alongside Brazilian superstar Ronaldinho at the 2000 Summer Olympics.

Alexsandro De Souza Is A Member Of