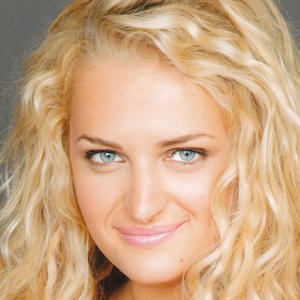 Known for her role as Anna in the 2015-2016 Deaf West Theatre's revival of the musical Spring Awakening. With her Broadway debut on September 27th, 2015, she became the first actress in need of a wheelchair for mobility to appear on a Broadway stage.

She became paralyzed from the chest down at the age of 2 as a result of a car crash. She graduated from New York University's Tisch School of the Arts with an MFA in 2009, and became the first wheelchair-bound actress to do so.

She finished in 2nd on 2012's The Glee Project reality competition series. She was subsequently cast in a guest starring role on Glee in 2013.

She was raised in Ridgewood, New Jersey by her parents Jodi and Jim. She has one older brother, Jake, and one younger sister, Tory. She dated Dani Shay.

She has appeared alongside Marlee Matlin during the 2015 revival of Spring Awakening.

Ali Stroker Is A Member Of