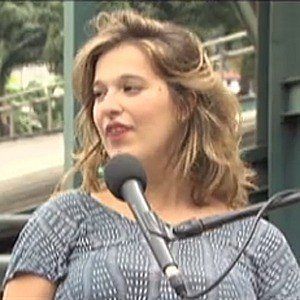 Brazilian pop and rock singer who has won fans with original songs like "Tudo Que For Leve" and  "Antes de Tudo." She is also known for her many cover songs, including Dorival Caymmi's "Sargaço Mar" and Maysa Matarazzo's "Meu Mundo Caiu."

She sang on her aunt Nana's album Desejo at just 12 years old. She studied law before dedicating herself to the performing arts full-time.

Her rendition of "Como Vês" was featured on the Rede Globo miniseries Felizes para Sempre?

She comes from a family of famous singers, including Dorival, Danilo, Nana and Dori Caymmi.

Her self-titled album features a cover of Bjork's "Unravel."

Alice Caymmi Is A Member Of