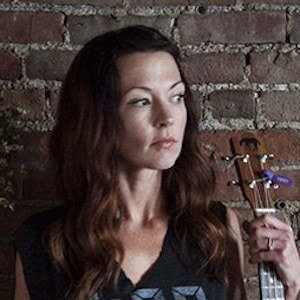 American singer, songwriter, and violin player who is best known for performing as a member of the Texas Playboys, Thrift Store Cowboys and Jason Isbell, and the 400 Unit. She is also known for being part of a duo with Rod Picott.

She received her first violin at the age of ten when she bought it from a pawn shop in Mineral Wells, Texas. At the age of 15, she joined the Texas Playboys which was known as the former backing band for Western swing legend Bob Wills.

Her song "When you Need a Train It Never Comes" from her album Carrying Lightning was ranked the fifth best song of 2011 by American Songwriter.

She began dating fellow musician Jason Isbell in 2011. They married in February of 2013 and then had their first child, Mercy Rose in September of 2015.

In addition to her career in music, she also starred in the 2011 film Country Strong where she starred alongside Gwyneth Paltrow as a backing singer.

Amanda Shires Is A Member Of