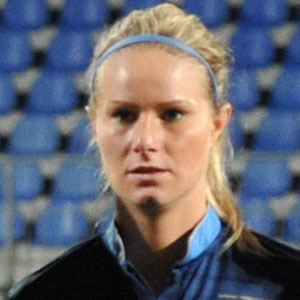 A defensive midfielder on the Division 1 French women's soccer club Olympique Lyon, she played in the 2010, 2011, and 2012 UEFA Women's Champions League finals. Before joining Lyon, she played two seasons with CNFE Clairefontaine.

During the 1990s and early 2000s, she played her youth career for OSM Lomme and the Iris Club de Lambersart. In 2004, she made her senior league debut for Henin-Beaumont, scoring eleven goals in her one season with the club.

As a member of France's national team, she played against Canada in the 2015 FIFA Women's World Cup.

She was born and raised in Lille, France.

Amandine Henry Is A Member Of