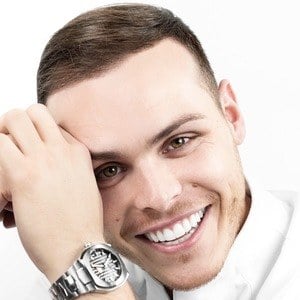 French pastry chef who runs the Pastry Academy by Amaury Guichon in Las Vegas, Nevada. He is recognized for his intricately detailed pastry creations that resemble art more than food. He starred in Netflix's show School of Chocolate in 2021.

He trained as a pastry chef in his native France, specifically at the L'École Hôtelière Savoie Léman when he was 14.

He studied pastry at Germany's Wolfsburg College in 2007 where he won first place in the Apprentice Chocolate Showpiece Contest. In March 2017, he created a 100% chocolate sculpture of a nautilus.

He is originally from France. His wife is named Fiona.

In 2013 he competed in a reality show contest called "Qui Sera le Porchain Grand Pâtissier?" which was overseen by a multitude of famous chefs, including Christophe Michalak, Christophe Adam, and Pierre Marcolini.

Amaury Guichon Is A Member Of