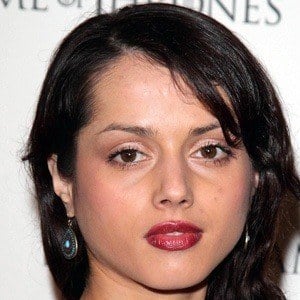 Rose to fame playing Irri on the hit HBO series Game of Thrones. She would later join the cast of Acquitted as Amina Sahir and The Good Karma Hospital as Dr. Ruby Walker.

Her first television credits were in episodes of Casualty and Doctors. She also made her film debut in 2011's The Devil's Double.

In 2013, she played Mina in the Norwegian drama I Am Yours.

Her father, Dr. Acharya, was from Nepal, and her mother was from Ukraine. Her family moved to England when she was six.

On Game of Thrones, her character Irri was a handmaiden to Emilia Clarke's character, Daenerys Targaryen.

Amrita Acharia Is A Member Of