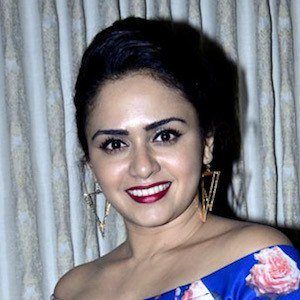 Bollywood and Marathi actress most well known for her roles in popular films like 2009's Natarang, 2008's Phoonk, its sequel Phoonk 2, and 2015's Welcome Zindagi.

She launched her career in 2004 when she competed on the talent series India's Best Cinestars Ki Khoj.

In 2015, she competed on the eighth season of Jhalak Dikhhla Jaa.

Born to Raju and Gauri Khanvilkar, she has a sister named Aditi. In 2015, she married actor Himmanshoo A. Malhotra.

In the films Phoonk and Phoonk 2, she played the character Aarti opposite actors Sudeep and Ahsaas Channa.

Amruta Khanvilkar Is A Member Of