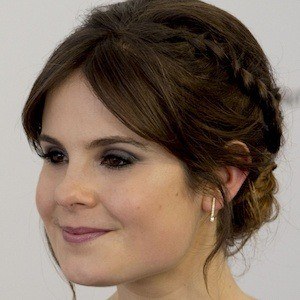 Known best for her starring role as Poppy Carlton in the BBC America comedy series Almost Royal (a mock reality TV show that she also co-wrote), this American-born English actress went on to appear as Sally in the humorous film Headlock Security.

Before beginning her screen acting career, she was a successful stand-up comedienne.

She created a comedic, feline fanatic character known as Pattie Brewster and published a humor book -- Pattie Brewster's Guide to Life/Pattie -- from the character's point of view.

Her father, Simon Hoggart, was a radio host; a political journalist for The Guardian; and a wine critic for The Spectator. He died of pancreatic cancer in 2014, leaving behind Amy; her brother Richard; and her psychologist mother, Alyson.

She and fellow English comedian Ed Gamble co-starred in and co-wrote Almost Royal.

Amy Hoggart Is A Member Of