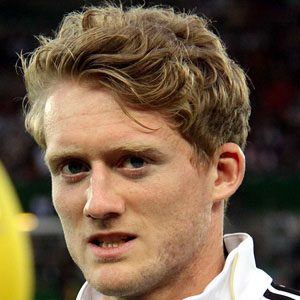 German forward who joined Chelsea in 2013 after spending two seasons with Bayer Leverkusen. He debuted with the German national team in 2010 and helped the team win the World Cup Championship in 2014. In 2016 he began playing for Borussia Dortmund.

He was just 6 years old when he joined local club Ludwigshafener SC.

He made his senior debut for FSV Mainz 05 in 2009 after spending three seasons with the club's youth squad.

He was born to Louise and Joachim Schurrle. He began a relationship with Montana Yorke, but the couple later ended their relationship. He and his wife Anna Sharypova welcomed a daughter named Kaia in April 2019.

He joined Fernando Torres on Chelsea in 2013.

Andre Schurrle Is A Member Of