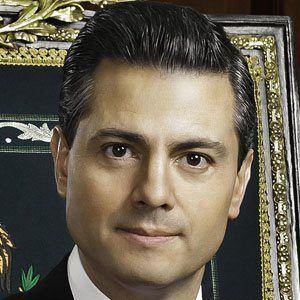 Mexico's 57th president who began his six year term in 2012, vowing to reinvigorate the country's economy and crack down on the drug wars.

With his PRI party thrown from power 12 years before for corruption, some of his critics feared his ascension meant a return to the bad old ways.

He faced a challenge in the drug war that killed an estimated 50,000 people, and in a break from policies of the past he sought to reduce drug violence rather than take on the cartels.

He has a total of four children. He has been married twice, first to Mónica Pretelini Sáenz then, following their divorce, to actress Angélica Rivera. In 2019, he began dating model Tania Ruiz Eichelmann.

He took over the presidency from Felipe Calderon.

Enrique Peña Nieto Is A Member Of