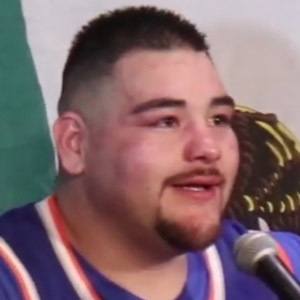 Mexican-American professional boxer who is known for having been the Super WBA, WBO, IBO, and IBF Heavyweight champion. He gained international recognition in June of 2019 when he defeated Anthony Joshua with a seven round technical knockout to claim the heavyweight title.

He started his amateur career under the Cuban trainer Fernando Ferrer. He started gaining further attention in 2008 when he competed in the Beijing Olympic Games for Mexico. He made his professional boxing debut in March of 2009 when he fought at the Plaza de Toros in Tijuana. He went on to compete for the WBO Heavyweight title in December of 2018.

He is known as "The Destroyer" and is the first fighter of Mexican descent to have won the multiple Heavyweight titles.

He was born and raised in Imperial Valley, California. He is married and has five children.

Anthony Joshua posted a picture with Drake through his Instagram prior to the fight. Posting a picture with Drake has resulted in sports curses that have been attributed to the losses of Conor McGregor, the Toronto Maple Leafs, and other athletes. The supposed curse worked in favor of Ruiz.

Andy Ruiz Jr. Is A Member Of