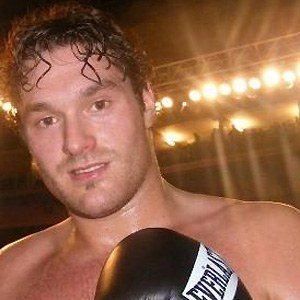 British and Irish Heavyweight Champion boxer who competed for Ireland in the Olympic games. He has won WBA, IBF, WBO and IBO titles, along with being named Fighter of the Year in 2015 by The Ring. After a two year hiatus, he returned to win both 2018's Comeback of the Year and Round of the Year.

As an amateur, he fought for both Ireland and England at an international level, winning the bronze at the World Junior Championships in 2008.

His win against long-reigning world champion Wladimir Klitschko was deemed the Upset of the Year in 2015, according to The Ring.

His father was the British Heavyweight boxer 'Gipsy' John Fury,  and his younger brother is reality star Tommy Fury, who also wrestles. His cousin is Irish boxer Andy Lee. He married Paris Fury in 2009. They have children named Prince and Venezuela. In June 2021, they welcomed their sixth child, a daughter named Athena.

He was named after the great American heavyweight boxer Mike Tyson.

Tyson Fury Is A Member Of