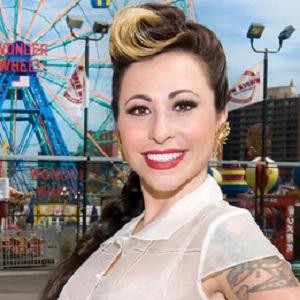 Known as The Italian Stallionette, she is one of the top burlesque performers in the world and one of the few involved in the ecdysiast arts. She earned burlesque's most prestigious award: Queen of Burlesque, Miss Exotic World 2008.

She was raised in an Italian-American community in Trenton, New Jersey. She studied dance from the age of 5. As a teenager, she worked at her parent's Jewelry Store before moving to New York City after high school at the age of 17.

She was named Best International Touring Artist by the Naked City/Alternative Media Group of Australia. She has been sought by clients such as Campari and Esquire magazine and has wowed celebrities such as Sting, Hilary Duff, Hugh Hefner, and more.

She is very close with her family and is the middle child between two sisters. In 2013, she married trumpet player and jazz crooner Brian Newman who often performs and collaborates with Lady Gaga.

She was asked to be featured in Snoop Dogg's Snoopadelic Cabaret on New Years Eve in 2014.

Angie Pontani Is A Member Of