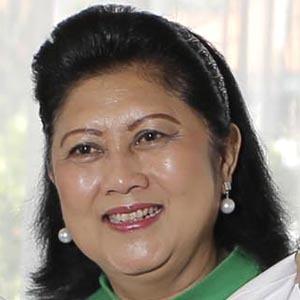 Wife of former Indonesian President Susilo Bambang Yudhoyono. She served as the First Lady of Indonesia from 2004 to 2014.

She was briefly a medical student at Christian University of Indonesia. She would eventually earn a bachelor's in political science at Terbuka University in 1994.

In 2007, a rare butterfly species was named after her, Delias kristianiae.

Her father, Sarwo Edhie Wibowo, was a renowned military leader. She and her husband had two children, Agus Harimurti and Edhie Baskoro.

As the First Lady of Indonesia, she often worked alongside then-Vice President Jusuf Kalla.

Ani Yudhoyono Is A Member Of