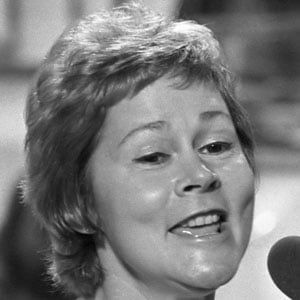 Singer, pianist, and producer known for being the founder of the critically-acclaimed vocal group The Anita Kerr Singers. With the group, she recorded more than thirty albums from the '50s to the '70s. Her song "Spanish Eyes" has accumulated over 150,000 streams on Spotify.

She was the leader of the choir for the program Sunday Down South on WSM radio in the late '40s.

She won back-to-back Grammy Awards for Best Performance by a Vocal Group for We Dig Mancini in 1965 and A Man and A Woman in 1966. She released 4 solo albums throughout her career.

Her second marriage was to Swiss businessman Alex Grob.

She and the Singers can be heard singing backup on songs by a variety of influential artists, including Roy Orbison.

Anita Kerr Is A Member Of