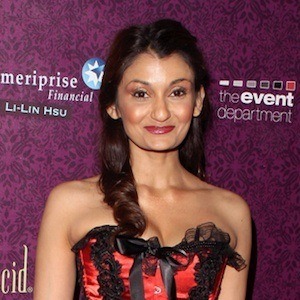 TV actress who found acclaim voicing the character Symmetra in the video game Overwatch. She also appeared in episodes of Modern Family as Nina Patel from 2011 to 2015.

She earned a degree in theater from Northwestern University with a certificate in musical theater.

She performed on Broadway in Andrew Lloyd Webber's Bombay Dreams, taking over the role of Bollywood diva Rani in the musical. She has 380,000 followers on her sweeetanj Instagram account.

Her parents Ela and Bharat Bhimani both studied medicine.

She appeared alongside Thomas Middleditch in an episode of Silicon Valley in 2016.

Anjali Bhimani Is A Member Of