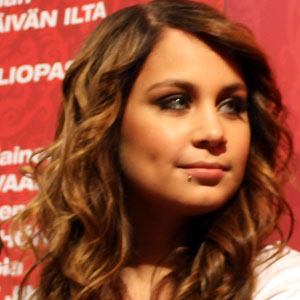 Runner-up on the third season of the Finnish version of Idol who became one of the top-selling singers in the country.

She was exposed to music from both her native Finland and Portugal at a young age.

Focusing on Latin-influenced works in her solo debut after Idol, her track "End of Love" became a top ten hit and her self-titled album was certified Platinum within its first week.

She was born in Vantaa, Finland; her father was Portuguese and mother was Finnish. She dated Panu Larnos from 2007 until 2009. She then began dating Joonas Wörlin, but after their breakup she began dating Lauri Heiskari. The couple wed in 2013.

For her audition for Finnish Pop Idol, she performed Alicia Keys' single "Fallin."

Anna Abreu Is A Member Of