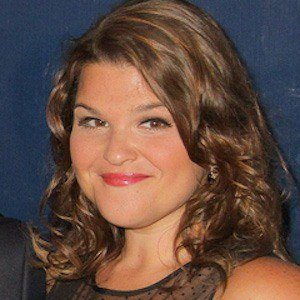 Film and television as well as Broadway and off-Broadway actress with stage credits in Wicked, Hairspray and about 20 others. She made her breakthrough as an actress for the screen in 2014's A Most Violent Year and would appear in The Intern the following year. She later starred in the CBS' series Criminal Minds: Beyond Borders.

She earned her Bachelor of Fine Arts in Musical Theatre from the University of Oklahoma and later graduated from the School at Steppenwolf Theatre Company.

She won a Lucille Lortel Award for Best Featured Actress in a Play in 2013.

Her hometown is Edmond, Oklahoma.

She starred alongside Jake Gyllenhaal in the stage production of If There Is I Havent Found It Yet.

Annie Funke Is A Member Of