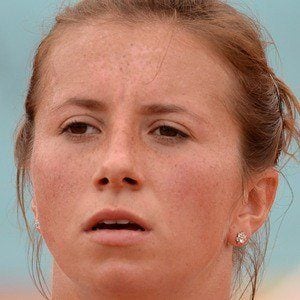 German tennis player who competed at the 2016 Olympic Games in Rio. She has won two singles and one double title on the WTA tour and seven single ITF titles. She ranked at 100 in the world doubles rankings in 2016.

Her parents introduced her to tennis at the age of 4.

She was the winner of the Junior Grand Slam finals for the French Open in 2012.

She was born to parents Johannes and Petra in Bonn, Germany.

She won her first WTA title against Barbora Strycova in the Luxembourg Open final in 2014.

Annika Beck Is A Member Of