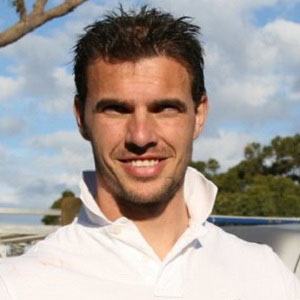 Australian goalkeeper of Croatian descent who won various league titles with PAOK, the Newcastle Jets and the Western Sydney Wanderers. He received the Melbourne Victory Victory Medal in 2012 and was named the A-League Goalkeeper of the Year in 2013.

He was born in Sydney and played youth soccer with Hurstville Zagreb in 1995. He made his professional debut with the APIA Leichhardt Tigers in 1996.

He was named the MVP of the 2014 AFC Champions League after holding opponents scoreless in 8 of 12 matches.

He married a woman named Linda and has children named Emelie and Christopher.

He was teammates with forward Mark Viduka on the Australian squad at the 2006 FIFA World Cup.

Ante Covic Is A Member Of