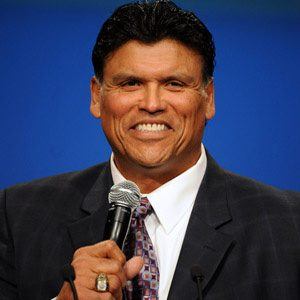 NFL Hall-of-Fame offensive tackle for the Cincinnati Bengals who was selected for the Pro Bowl 11 times and named Offensive Lineman of the Year three times.

He was part of USC's championship-winning 1978 baseball team.

He was sidelined by knee and shoulder injuries in 1992, and his attempted comeback with the Tampa Bay Buccaneers in 1993 ended before the season began.

He fathered a son and a daughter, Michael and Michelle, with his wife DeDe.

He appeared in the Oscar-nominated film The Right Stuff, starring Dennis Quaid.

Anthony Munoz Is A Member Of