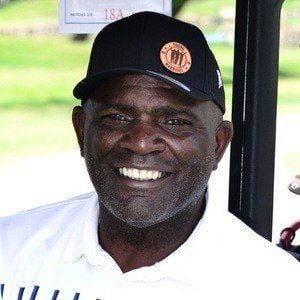 New York Giants linebacker known as "LT" who is considered by many to be the greatest linebacker ever. He was a 2-time Super Bowl Champion, 10-time Pro Bowl selection, and the 1986 NFL Most Valuable Player. He retired with 132.5 career sacks and 1,088 tackles.

He played college football at the University of North Carolina, where he was an All-American in 1980. He was taken second overall in the 1981 NFL Draft.

His off-field career was fraught with legal issues and controversy, particularly regarding his abuse of cocaine.

He and fellow Pro Football Hall of Famer Phil Simms formed the backbone of the Giants in the 1980s and early 1990s.

Lawrence Taylor Is A Member Of