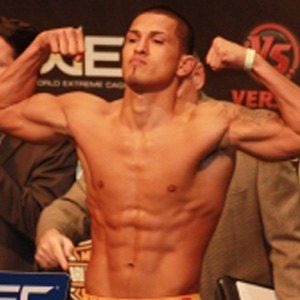 Lightweight American mixed martial artist who began his World Extreme Cagefighting career in 2009 and joined the UFC in 2010 with the WEC/UFC merger. For much of his career he was ranked as a Top Ten pound-for-pound fighter, but lost that status in 2017 after four successive losses.

He attended Dominican High School and studied boxing and tae kwon do.

His grandfather, born Perez, changed his family name to Pettis so he and his other family members could avoid discrimination.

He was born to Eugene Pettis Jr. and Annette Garcia and grew up with two brothers.

He defeated Jeremy Stephens in a split decision match on October 8, 2011 at UFC 136.

Anthony Pettis Is A Member Of