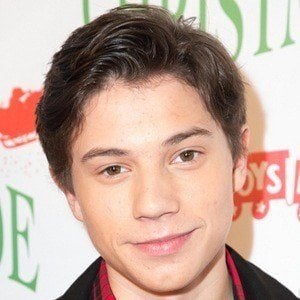 2016 addition to the cast of the soap opera The Bold and the Beautiful who booked the role of RJ Forrester. In 2019, he earned the role of Will on the Netflix show No Good Nick and in 2020, he began starring as Felix on the series Love, Victor.

His first acting job was in a commercial for Trivial Pursuit.

He has been a guest-star of the shows Life In Pieces, Comedy Bang! Bang! and Henry Danger.

He and Tequan Richmond both earned Daytime Emmy nominations in the category of Outstanding Younger Actor in a Drama Series in 2017.

No Good Nick
Love, Victor
The Bold and the Beautiful
More