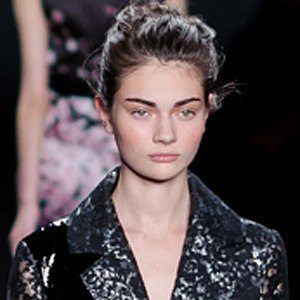 Ukrainian model who made her mark in the modeling industry after catching the eye of Calvin Klein's creative director and opening and closing his Spring/Summer 2013 show. She has also walked the runway for the likes of Miu Miu, Prada, Alexander McQueen, Chanel and Givenchy.

She made her her debut on the runway for Christian Dior's Fall/Winter Haute Couture 2012 show.

She appeared in a beauty editorial for Elle Ukraine.

She was born Antonina Vasylchenko, but is nicknamed Tonya by friends. She started modeling around the age of 17 and signed with IMG Models. She began dating art dealer/collector and restaurateur Alberto Fis.

She has walked runway for designer Christian Dior.

Antonina Vasylchenko Is A Member Of