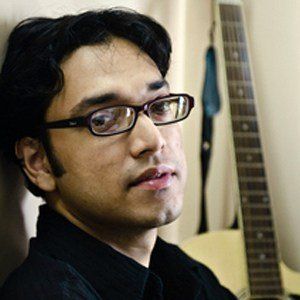 Lyricist and composer who is widely known for his 2010 breakout single "Amake Amar Moto Thakte Dao," which appeared on the soundtrack for the film Autograph. In 2015, he won the Filmfare Award for best background score for his work on the Bollywood film Piku.

He began writing songs as a young child. In addition to writing two songs for the 2010 film Autograph, he also debuted as a composer for the film's score.

He was also nominated for the 2015 Filmfare Award for best musical director for his work on the film Piku. In 2012, he had his inaugural book, a collection of poems titled Sara Raat Kete Jaay Tor Kawtha Bhebe, published.

He was born in Kolkata, West Bengali, India.

His 2010 single "Bneche Thakaar Gaan," which also appeared on the Autograph film soundtrack, was sung by Rupam Islam.

Anupam Roy Is A Member Of