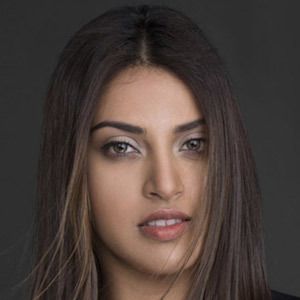 Indian actress and model who is known for being a brand ambassador for the jewelry company Varuna D'Jani and for starring in the films Wedding Pullav and Batti Gul Meter Chalu.

She attended the ITA School of Performing Arts and later the Anupam Kher School of acting. She began her career in entertainment as a model and worked for brands and designers such as Manish Malhortam Vikram Phadnis, and Neeta Lulla. Her acting debut then came in the romantic comedy Wedding Pullav in October of 2015.

She is known for having won the Best Debut Actress award at the TSR National Film Awards in 2015 for her role in Wedding Pullav.

She is known for also being a spokesperson for her mothers Anu Ranjan's company. Her father Shashi Ranjan was also an actor and director.

She starred alongside Shahid Kapoor in the feature film Batti Gul Meter Chalu.

Anushka Ranjan Is A Member Of