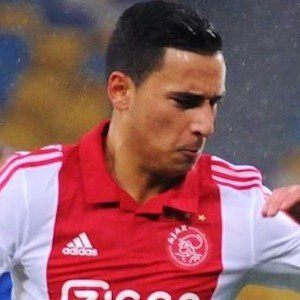 Professional soccer player who is known for his time on the Dutch club Ajax, and as a member of the Dutch national team. He debuted for the Netherlands' Under-18 team in 2012.

He began his professional soccer career in the youth system of his local club, BVV Barendrecht. In 2013, he joined the youth program of the Ajax club team.

In July 2013, he was officially signed to the professional level of the Ajax club. He made his regular season debut for the club in the season-opening game of the 2014-2015 season.

He was born and raised in Barendrecht, Netherlands.

He sought advice from Cristiano Ronaldo on which country - Morocco or the Netherlands - he should play for in his international career, as he was eligible for both.

Anwar El Ghazi Is A Member Of