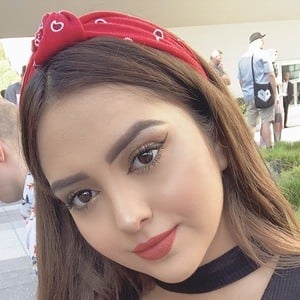 Mexican online gaming personality who is widely known for her Ari Gameplays YouTube channel. She has earned popularity there for her playthroughs, Let's Plays, and tutorials for a litany of gaming titles, including Overwatch, Minecraft, and Planet Coaster.

She began her YouTube channel in July 2014. She began pursuing a career in communications in 2015.

She attended Minecon 2016 in California. She has also amassed more than 3.6 million followers to her AriGameplays Twitch channel. She also has more than 19 million followers on TikTok, where she posts viral dance videos and lip syncs. She received over 1.8 million hearts on a November 2021 video montage of her with her husband.

Her real name is Abril Abdamari Garza Alonso. She was born and raised in Mexico. Her parents' names are Adriana and Abelardo. Her sister is popular YouTube gamer Ama Blitz. She began dating Juan Sebastián Guarnizo in 2015 and in October 2019, they got married.

Ari Gameplays Is A Member Of