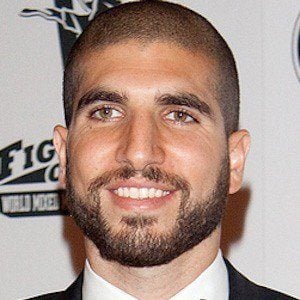 MMA journalist who was controversially banned from attending UFC events after reporting that Brock Lesnar would fight at UFC 200, news which the organization didn't want released at the time. The UFC's move was widely criticized and Helwani's ban was repealed.

He attended Syracuse University, where he studied at the S.I. Newhouse School of Public Communications. He's worked for companies like Fox Sports 1 and MMAFighting.com.

Well-respected within his industry, he won six consecutive MMA Journalist of the Year awards between 2010 and 2015.

He married Jaclyn Stein and has two children.

As host of the podcast The MMA Hour, he's had the opportunity to interview some of the biggest names in the sport, including Michael Bisping, Frankie Edgar, and Rampage Jackson.

Ariel Helwani Is A Member Of