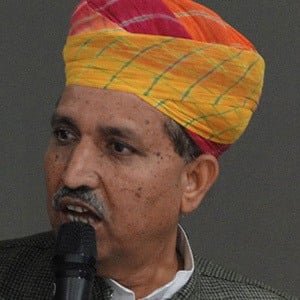 Politician who is best recognized for having served as both the Minister of State for Parliamentary Affairs as well as for Heavy Industries and Public Enterprises. He is also known for having been a Member of Parliament for Lok Sabha.

He graduated with his degree in Law in 1977. He first gained attention after his election to the Rajasthan Udhyog Seva and later in 1994 was appointed Officer on Special Duty to the Deputy Chief Minister of Rajasthan.

He is also known for having previously served as Union Minister of State for Finance as well as for Water Resources, River Development, and Ganga Rejuvenation.

He was born and raised in Bikaner, Rajasthan, India.

He served under Prime Minsiter Narendra Modi as the Union Minister of State for Finance.

Arjun Meghwal Is A Member Of