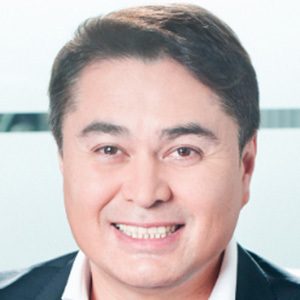 Russian media mogul and manager who is best recognized for his work as the General Director of the Russian music channel Muz-TV. He is also known for having been the head of the CEC Youth Unity wing of the United Russia party.

He went to a vocational technical school and later attended the Moscow Institute of Civil Engineering. He then went on to earn his Law degree and started serving in the Perovsky district of Moscow. After attending a Voice of Asia festival, he chose to dedicate his career towards music and entertainment.

He has won several awards including the Oder of Kurmet by the President of the Republic of Kazakhstan in December of 2012.

He was born and raised in the Orenburg region of Tamar-Utkul. He is the youngest of two other siblings.

During his time with the Muz-TV Awards, he helped schedule the performances of several foreign artists in the country including Katy Perry and Jennifer Lopez.

Arman Davletyarov Is A Member Of