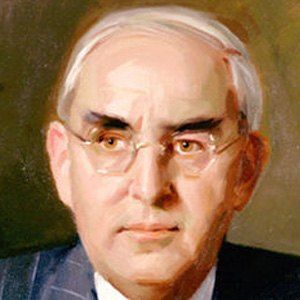 Republican senator from Michigan from 1928 to 1951 who was a key figure in the formation of the United Nations after the first World War. He was the President pro tempore of the United States Senate from 1947 to 1949.

He studied law at the University of Michigan before working as a newspaper reporter, editor, and publisher at the Grand Rapids Herald.

As a member of the United States Senate Foreign Relations Committee he supported the isolationist Neutrality Acts of the 1930s.

He married twice, his last marriage was to Hazel Whittaker in 1918.

He opposed the New Deal, which Franklin D. Roosevelt tried to instill.

Arthur H. Vandenberg Is A Member Of