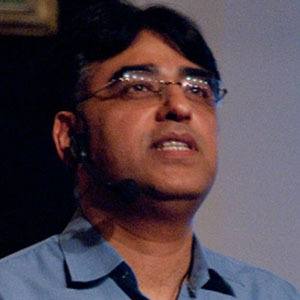 Politician who has gained fame for serving as Pakistan's Federal Minister for Finance, Revenue, and Economic Affairs. He assumed office in August 2018 after a successful career as the CEO of Engro Corporation between 1997-2012.

He earned his bachelor's degree from Pakistan's Government College of Commerce & Economics. He later graduated with his MBA from IBA Karachi in 1984.

He was elected to the National Assembly of Pakistan on behalf of the centrist party Pakistan Tehreek-e-Insaf in August 2018. He was awarded the Sitara-i-Imtiaz, Pakistan's third-highest civilian honor, in 2009.

He has served in the National Assembly of Pakistan under Pakistani president Mamnoon Hussain.

Asad Umar Is A Member Of