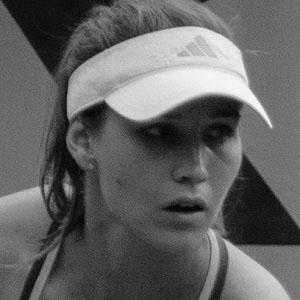 American tennis player who won eight ITF singles and five ITF doubles during her career. She retired from professional tennis in 2012, at which point she became a broadcaster with the Tennis Channel.

She was born in Rossville, Georgia and turned professional in June 2000, when she was fifteen years old.

In August 2008, she became the first professional tennis player to pose for the U.S. edition of Playboy magazine. She claimed to have been inspired by Olympic swimmer Amanda Beard.

She was married to fellow tennis player Alex Bogomolov, Jr. from 2004 to 2006. In 2009 she married tennis player and coach Chuck Adams, with whom she has children named Charlie and Loretta.

In 2006, she partnered with Bethanie Mattek-Sands at the ECM Prague Open and the Grand Prix SAR La Princesse Lalla Meryem.

Ashley Harkleroad Is A Member Of