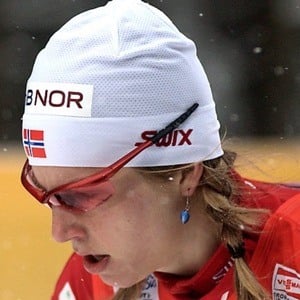 Cross-country skier who won the gold medal in the 4 × 5 km relay while representing Norway at the 2018 Winter Olympics. She previously won gold at the FIS Nordic World Ski Championships in 2007, 2015 and 2017.

She skied for the first time at age 3 and joined her first ski club at 10. She studied medicine at the University of Oslo.

In 2009, she suffered a mountain biking accident in which her jaw, back and elbows were broken. She recuperated in time to compete at the 2010 Winter Olympics.

Both of her parents were doctors. She has a brother named Sten.

She won  gold alongside Norwegian teammate Marit Bjorgen in 2018.

Astrid Uhrenholdt Jacobsen Is A Member Of