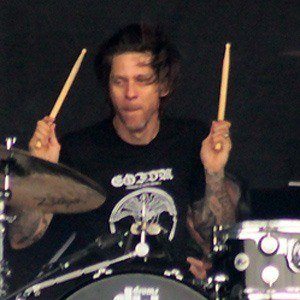 Drummer with Social Distortion, The Offspring, and several punk rock groups. He was also involved with Angels & Airwaves and Against Me!

His first and longest tenure was from 1990 to 2000 with the California rock band Rocket From the Crypt, which he joined when he was sixteen years old.

He replaced the Offspring's longtime drummer in 2003, but did no recording on their studio albums; at the same time, his newfound group Angels & Airwaves was pushing him from the band.

Ron Welty was The Offspring's drummer before Willard, until 2003.

Atom Willard Is A Member Of

The Offspring
Angels & Airwaves
Against Me!
49 Year Olds