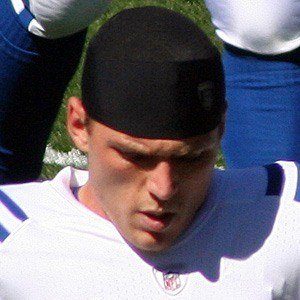 NFL wide receiver who played for the Indianapolis Colts from 2009 to 2012.

He ended his college career at BYU as the school's all-time leader in receiving yards and touchdowns.

He helped the Colts reach the Super Bowl during his rookie 2009 season.

He married Brooke Pendleton in 2007 and he and Brooke have a son named Nash.

He became teammates with star quarterback Peyton Manning on the Colts in 2009.

Austin Collie Is A Member Of