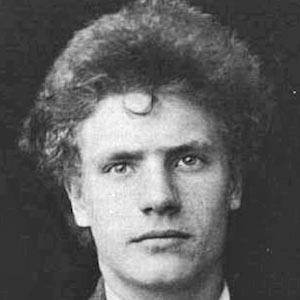 British painter and occultist who was inspired by symbolism and art nouveau. He specialized in line usage, as well as sexual and grotesque imagery. His 'Portrait of the Artist' from 1907 was purchased by Led Zeppelin guitarist Jimmy Page.

He attended the Royal College of Art, where he developed his artistic aesthetic based upon fine lines and geometric shapes. His silver medal at the National Competition of Schools of Art brought him to the attention of judges Walter Crane and Byam Shaw.

He also developed the technique of automatic writing and published "The Book of Pleasure" in 1913 and "The Focus of Life" in 1921.

His father was employed with the City of London Police. He was born in the Bloomfield House tenement, a housing complex for police officers, drivers, clerks, and market workers. He married Eily Gertrude Shaw in 1911.

He was inspired by the occultist philosophy of Aleister Crowley.

Austin Osman Spare Is A Member Of