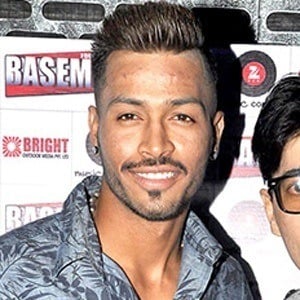 Cricket all-rounder who helped lead Baroda to a Syed Mushtaq Ali Trophy victory in the 2013-2014 season. He's represented India at the Test, ODI, and T20 levels. He scored his first Test century against Sri Lanka in 2017, scoring an Indian-record 26 runs in one over during that innings.

In 2015-2016, he helped lead Baroda back to the Syed Mustaq Ali Trophy final by averaging a 53.85 in the tournament, but they ultimately lost to Uttar Pradesh.

He has an older brother named Krunal Pandya who is also a cricketer. He was romantically linked to Lisha Sharma in 2017. He became engaged to an Indian-based Serbian dancer and actress Natasa Stankovic in January 2020. They welcomed their first child, Agastya Pandya in July.

He and Ajinkya Rahane have played together on India's national cricket team.

Hardik Pandya Is A Member Of