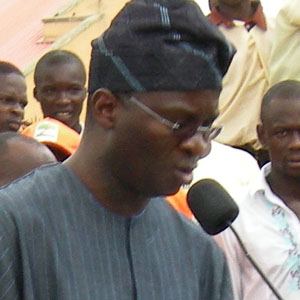 Member of the Nigerian Action Congress Party and 13th Governor of Nigeria's Lagos State. He began his first term as Governor in 2007 and was re-elected in 2011. His political tweets have earned him over 800,000 followers on his Twitter account.

He earned his law degree from the University of Benin and undertook additional professional training at the Nigerian Law School. In 1988, he earned the prestigious legal title of Senior Advocate of Nigeria.

While serving as Governor of Lagos, he dedicated himself to the Eko Mega City Project, seeking to turn Lagos into one of the world's major cities.

The son of Ademola Fashola, he was born into Muslim nobility. He later married Abimbola Emmanuela Fashola.

He and former Nigerian President Umaru Musa Yar'Adua both held the office of Governor of a Nigerian state (Yar'Adua governed the Katsina State).

Babatunde Fashola Is A Member Of