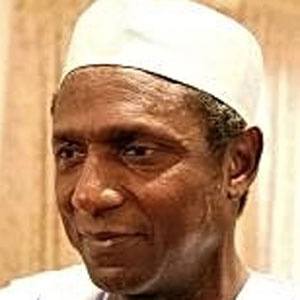 Politician and member of the People's Democratic Party who was the President of Nigeria and the thirteenth Head of State from 2007 to 2010. He had previously served as governor of Katsina State in northern Nigeria for eight years.

He worked at Holy Child College and lectured at several universities before becoming involved in politics through the People's Redemption Party.

He was known for his relatively spotless record and earned his degrees in Zaria in the sciences.

He had seven children with his first wife, Turai Umaru Yar'Adua, and he later remarried Hauwa Umar Radda, with whom he raised two children.

His tribute was written by Wole Soyinka, a Nigerian Nobel Prize-winning writer.

Umaru Musa Yar'Adua Is A Member Of