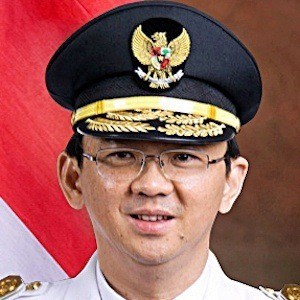 Indonesian politician known for being the 17th governor of Jakarta. He's of Chinese descent and Christian faith, which made him a target of nationalists and Islamic fundamentalists in the country.

His political career got started in 2005, when he was elected a regent of East Belitung.

He has a degree in Geological Engineering from Triskati University.

He has three children named Nicolas, Natania and Daud with wife Veronica Tan.

He succeeded Joko Widodo as governor of Jakarta.

Basuki Tjahaja Purnama Is A Member Of