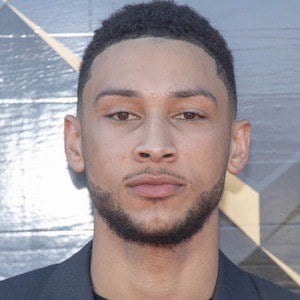 Australian basketball player who was selected first overall in the 2016 NBA Draft by the Philadelphia 76ers after spending one year playing college basketball at LSU. He was named the NBA Rookie of the Year in 2018.

He grew up in Newcastle, New South Wales and began playing for the Newcastle Hunters' Under-12 squad at age 7. He also played Australian rules football and rugby league at the junior levels.

He had a decorated high school career, becoming a McDonald's All-American and receiving the Naismith Prep Player of the Year and Gatorade National Player of the Year awards. He helped Australia take home a gold medal at the 2013 FIBA Oceania Championship.

His father is former Australian National Basketball League player Dave Simmons. One of his brothers coached the Nicholls State Colonels men's basketball team and his sister Emily was a member of the women's rowing team at West Virginia University. He briefly dated singer Tinashe Kachingwe in 2018, then dated Kendall Jenner for about a year. He has been dating TV presenter Maya Jama.

He played with NBA guard Matthew Dellavedova on the Australian team at the 2013 FIBA Oceania Championship.

Ben Simmons Is A Member Of