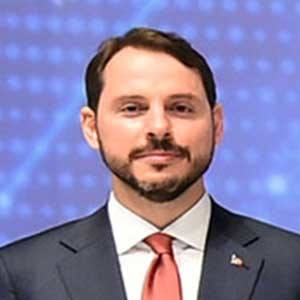 Turkish politician and businessman who is best known for being the son-in-law of Turkish President Recep Tayyip Erdogan. He is also the former CEO of Calik Holding and was a former Minister of Energy and Natural Resources. He is also known for having served as the Minister of Finance and Treasury.

He attended Istanbul University where he studied in their school of Business Administration. He became the financial director of the US office of Calik Holding in 2002. He became involved in politics in 2015 when he became a member of the Justice and Development Party within Turkish Parliament.

His article on Wikipedia led to the database website being banned in Turkey.

He married Esra Erdogan and together they have three children.

He was originally appointed the Minister for Energy and Natural Resources in the Turkish government under Ahmet Davutoglu.

Berat Albayrak Is A Member Of