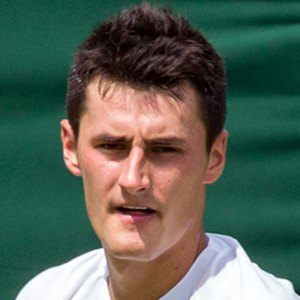 Australian tennis player who reached the quarterfinals of the 2011 Wimbledon tournament.

He attended Southport State School where he excelled in tennis, then turned professional in 2008.

He competed in the 2012 London Olympics but lost in the first round to Japan's Kei Nishikori.

His father is Croatian and his mother is Bosnian; both left Yugoslavia years before he was born. His younger sister is tennis player Sara Tomic.

He was defeated by Novak Djokovic in four sets in the quarterfinals of the 2011 Wimbledon tournament.

Bernard Tomic Is A Member Of