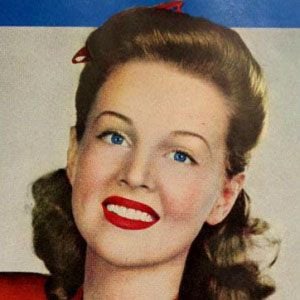 Famous during the 1930s and '40s for her work as an actress and singer, she performed the hit song "I Don't Want To Walk Without You" for the soundtrack of the 1942 film Sweater Girl and acted in the 1930s movies Forgotten Faces and The Arizona Raiders. In addition, she frequently performed on a radio program called Meet Me at Parky's.

She began her entertainment career at the age of eight and, by fifteen, was working for Paramount Pictures.

Up until the 1960s, she worked as a cabaret singer.

She spent her youth in Rockford, Illinois. Her marriage to television network executive Willet Brown produced one child.

She shared the screen with Bing Crosby and in the 1942 musical movie Star Spangled Rhythm.

Betty Jane Rhodes Is A Member Of