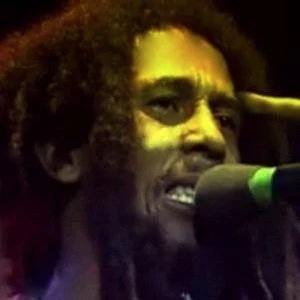 Born Nesta Robert Marley, he became known as the Ambassador of Third World for his music and sold over 75 million reggae albums worldwide. He died of cancer at Cedars of Lebanon Hospital in Miami, Florida.

Although of mixed race, he identified as black and was a big supporter of the Back to Africa movement and the Rastafari movement. He put up posters of the Black Panthers and Che Guevara in the Wailers Soul Shack record store.

His hits "No Woman, No Cry," "Could You Be Loved," "Get Up, Stand Up," and "Redemption Song" preceded his tragic death. He was buried with a soccer ball, a Gibson guitar, a Bible, and a bud of marijuana. He was inducted into the Rock and Roll Hall of Fame in 1994.

He got married to Rita Marley on February 10, 1966 and they had three children together. He had a total of eleven children across all of his relationships.

He, Peter Tosh, and Bunny Wailer formed The Wailers (later Bob Marley and the Wailers) in 1963.